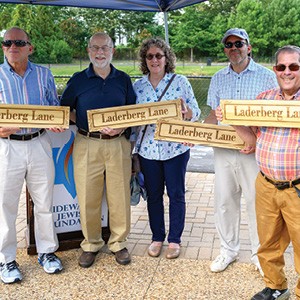 Laderberg Lane, honoring Alma and Howard Laderberg (of blessed memory) was formally dedicated on Monday, July 22. The walking trail that surrounds the pond basin at the Sandler Family Campus, was made possible by the couple’s generosity and their after-lifetime gift that established an endowment to benefit the campus.

The Laderberg’s four grown children, William Laderberg, Harry Laderberg, Romney Laderberg, and Linda Laderberg Baltuch joined by her husband, Leigh Baltuch, who was said to be like a fifth child to the beloved couple, as well as Mallory Stark, a dear friend to the family, attended the ceremony. Staff and lay leadership from United Jewish Federation of Tidewater/Simon Family JCC and Tidewater Jewish Foundation also attended.

Each of the siblings received a hand carved wooden sign reading, “Laderberg Lane” as an expression of thanks from the Jewish community.

The dedication ceremony took place along the trail itself which had been decorated with chalk art and messages of gratitude by the children attending JCamp. Linda Laderberg Baltuch spoke on behalf of her family, noting that this project was just one of many that her parents’ generosity had helped make possible throughout Hampton Roads.

Baltuch added that on the way to the ceremony, she and her brothers were reminiscing about their parents, recalling that they enjoyed taking walks and could often be seen strolling the neighborhood. All felt that their parents would be particularly fond of the trail and would be pleased to know the community would be enjoying it for years to come.

Scott Kaplan, TJF president and CEO and Amy Levy, UJFT president, expressed appreciation on behalf of their respective organizations and the Jewish community. Kaplan, who delivered opening remarks, said “It is an honor and a privilege for us to recognize, thank and memorialize the Laderberg family for their generosity. This family is truly an example of L’dor V’dor (from Generation to Generation). Alma and Howard taught and exemplified the values of tzedakah and have left this world a better place through their planning and generosity which will have an impact for generations to come.

Construction of the tree lined trail began in November 2018 and was completed earlier this year. The pond itself is a manages on site storm run-off and was created when the campus was built. Approximately 75 to 100 people use the track each day.

Alma and Howard Laderberg were pillars of the Jewish community, volunteers, and philanthropists whose generosity could be felt far and wide. They supported numerous Jewish and secular organizations including UJFT, Beth Sholom Village, Gomley Chesed, Jewish Family Service, the Virginia Festival of Jewish Film, The Chrysler Museum, American Red Cross, ACCESS College Foundation, and the Foodbank (to name a few of the organizations they supported and continue to support through endowments).

“Mom and Dad were very proud of the diversity of recipients of their generosity,” says Baltuch. “In fact, there was a common theme in so many of their gifts. They loved to benefit Jewish causes and places, education in general, and children in general. Their Foodbank gift coincided with a new program at the time, called Kids’ Cafe. They gifted a refrigerated truck that would be utilized to deliver breakfasts to poor children once they arrived at school, among other tasks for the truck. How better to foster learning than to begin a day with a full tummy.”

In 1995, Howard Laderberg took out a life insurance policy that helped the couple fulfill many of their philanthropic goals. Together, they joined the Simon Family Legacy Society, and worked with Tidewater Jewish Foundation to put together a plan that would ensure the organizations and causes they believed in would continue to be supported after their passing and in perpetuity. The Laderberg Campus endowment was just one of the many generous philanthropic plans made possible through their gift of charitable life insurance.

Howard Laderberg died in August of 2017 and was preceded in death by Alma in February of 2007. Their Book of Life entry was written by the couple to commemorate their formal philanthropic commitment to the future of the Tidewater Jewish community. It reads as follows,

Throughout our married years, we have been fortunate to have gradually been able to further their ideals and to expand on them. This is our way of showing gratitude for all the blessings which have been bestowed upon us. Our intent is for our children and grandchildren to continue with the principles of Tzedakah that have begun.

We have lived through the best of times and the worst of times. History has taught us that we must truly be our brother’s keeper. We sincerely hope and pray that this endowment to the Tidewater Jewish Foundation will help preserver Jewish and secular values for endless years ahead.”

For more information about how to make a lasting charitable impact with a charitable life insurance policy, contact Kaitlyn Oelsner at koelsner@ujft.org or 757-965-6103.